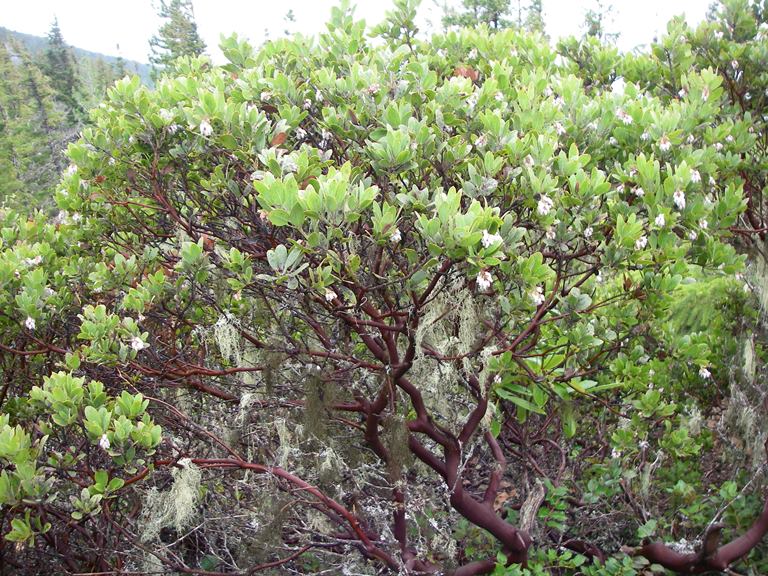 Names: This species is also known as Columbia or Redwood Manzanita. Arcto means bear; staphylos means a bunch of grapes.  Columbiana is derived from the Columbia River, which got its name from Captain Gray’s Ship, Columbia, which in turn was named for Christopher Columbus. Manzanita is Spanish for “little apples.”  Hairy refers to the gray-green hairs that cover its leaves

Relationships: There are about 70 species of Arctostaphylos.  All, but one, are evergreen.  Shrub forms are called Manzanita; low-growing groundcovers, and alpines are usually called Bearberries.  Most are native to the Western United States with about 55 species confined to California.  Three of the Bearberries have a circumpolar distribution, found in Northern North America and the northern regions of Europe and Asia. They and other low-growing Arctostaphylos sp. will be discussed in the section on groundcovers. 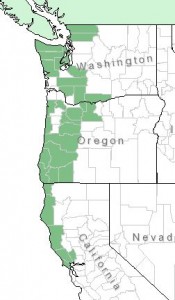 Distribution: Hairy Manzanita is found from Vancouver Island in British Columbia to the coast of Northern California, mostly on the west side of the Cascade Mountains. 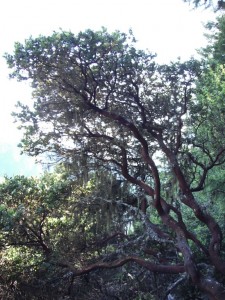 Growth: Hairy Manzanita grows at a moderate rate up to 15 feet (5m).

Habitat: It is found in dry, open, sunny places and rocky hillsides, often in disturbed areas.   It is a bushy shrub that may be erect or spreading. 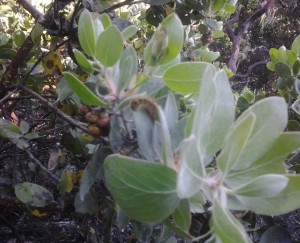 Diagnostic Characters: Its grayish-green, hairy foliage and branches with peeling reddish, brown bark give it a very distinctive appearance in the Northwest.  The flowers are the typical white to pinkish bells of many of our Ericads.  The berries are a brownish-orange. 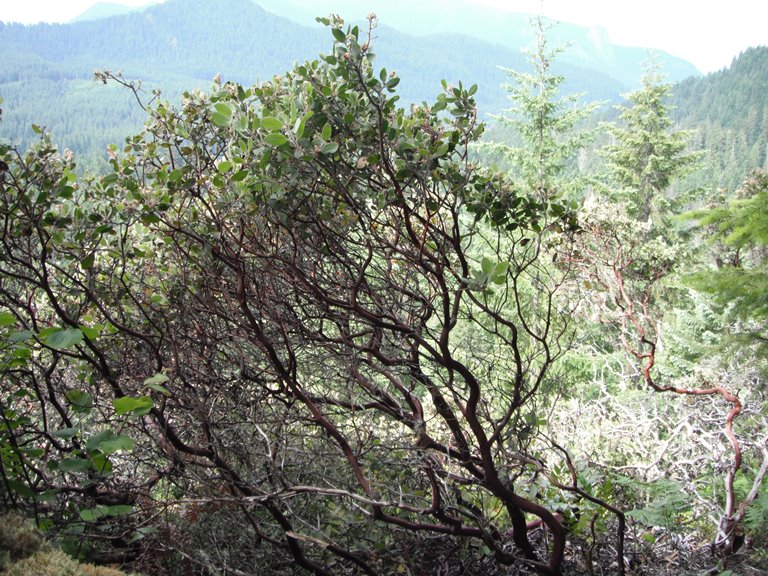 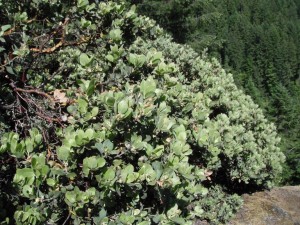 In the landscape: it is an attractive addition to southern or western exposures.  The gray-green foliage makes a subtle contrast with other shades of green.  The reddish-brown, peeling bark adds interest along with its delicate pinkish-white, bell-shaped flowers and the orange, almost coppery, colored berries.   It is often sought out by gardeners, but unfortunately is not readily available due to difficulty in propagation. 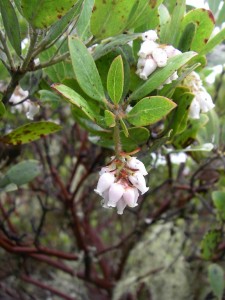 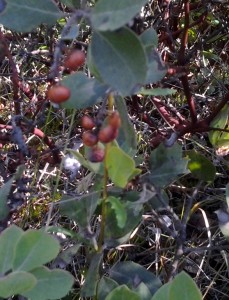 Propagation:  Hairy Manzanita has a very hard seed coat.  In nature it must go through the digestive tract of an animal or a fire before it will germinate.  Many sources suggest different methods of scarification including soaking in sulfuric acid for 24 hours, soaking in boiling water for 10- 20 seconds, or burning straw on top of them.  After scarification, seeds need to be stratified at 40ºF (4ºC) for 2 months, some recommend a warm stratification for 60 days prior to the cold stratification.  Heel cuttings taken from August to December should be treated with a hormone and stuck in a sand-peat media.  Layering is perhaps the easiest method of propagation, but these plants do not like their roots disturbed and transplanting should be performed with great care.

Use by people: A yellowish-brown dye may be made from its leaves.  The hard wood burns with a bright light and is useful for making small tools.  Some native people ate the berries.

Use by Wildlife: Birds such as sparrows and grosbeaks and small mammals such as skunks and chipmunks also eat the fruit.  Deer browse on the foliage.  The dense evergreen foliage provides excellent cover for wildlife.

Other species and naturally-occurring hybrids in our area:

(Click on LInk to see the USDA treatment of each species)

Greenleaf Manzanita, Arctostaphylos patula  In Washington, this species is only known to occur on the north shores of Lake Chelan and in Klickitat County near the Columbia River.  It is found in the Cascades of Oregon and throughout much of the Southwest.  It grows 3-6 feet (1-3m) tall and has nearly round leaves and the characteristic smooth, red bark.

Media Manzanita, Arctostaphylos x media Green (pro sp.), is a natural hybrid between Hairy Manzanita and Kinnikinnick (A. uva-ursi). Although it is most common on the Kitsap Peninsula in Washington State, it may occur wherever the ranges of its parents overlap.  It is intermediate in both form and leaf characteristics.  Media Manzanita only reaches a little over 2 feet (0.75m) tall but may spread up to 15 feet (5m).  Leaves are dark, gray-green and not as hairy as Hairy Manzanita.  Branches are a brighter red than Kinnikinnick.  It is an attractive, spreading shrub or groundcover for dry, gravelly areas but is difficult to find in the nursery trade.  Seeds are not usually produced; when they are, they either are not viable or are have a dormancy that is difficult to break.  Propagation may be achieved by cuttings or layering. 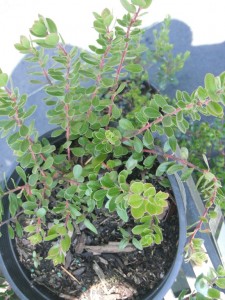 Media Manzanita at the nursery. 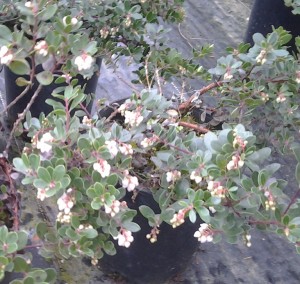 Arctostaphylos columbiana x A. nevadensis: Hairy Manzanita also hybridizes with Pinemat Manzanita, A. nevadensis,where ranges of the two species overlap, most notably in the Mount Hood region and the Big Lava Bed in Oregon.

Arctostaphylos patula x A. nevadensis may be found where A. patula occurs.  Reportedly, in some areas, this hybrid may be so common that it is hard to find pure A. patula.

Arctostaphylos patula x A. uva-ursi may also occur in the Lake Chelan area, but is not confirmed.

Arctostaphylos columbiana x A. patula occurs in Oregon but is not known in Washington.

*Many of these hybrids have been studied by the esteemed native plant expert, Arthur R. Kruckeberg. 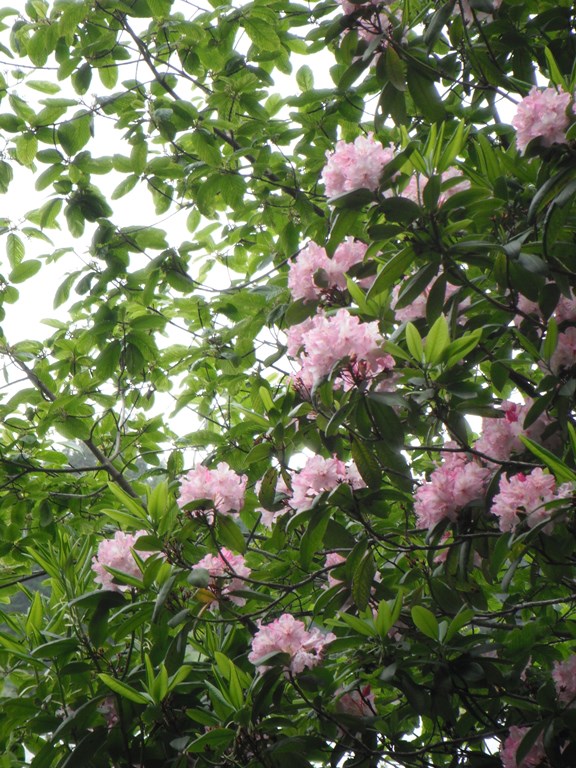 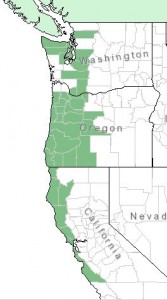 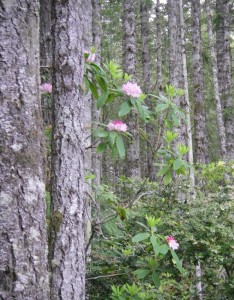 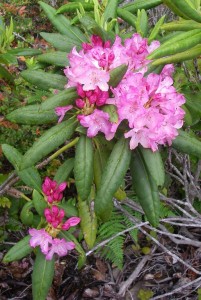 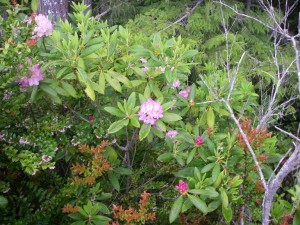 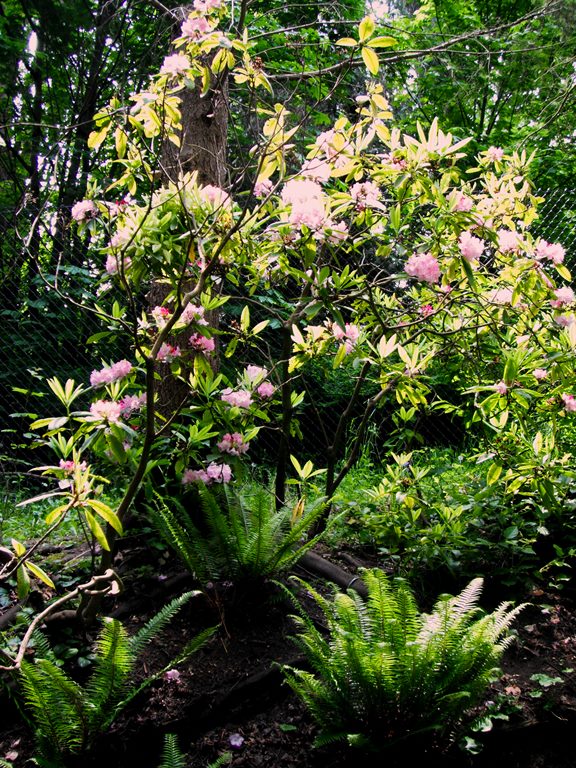 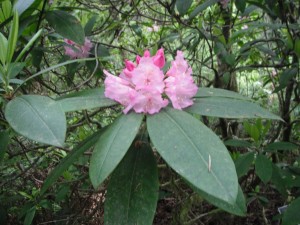 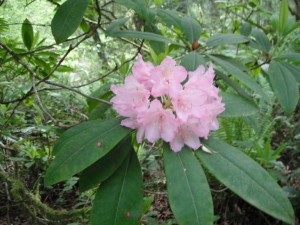 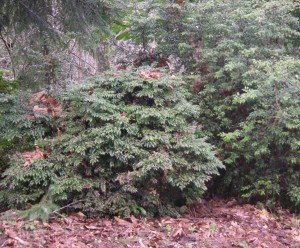 Relationships: There are about 450 species of Vaccinium worldwide, about 40 in North America with about 15 in the Pacific Northwest.  The genus Vaccinium includes Blueberries, Huckleberries, Cranberries, Lingonberries, Whortleberries, Bilberries and Cowberries.  Other Northwest Vacciniums will be discussed later under the sections on Deciduous Shrubs and Groundcovers.

Distribution: Evergreen Huckleberry is found on the west side of the Cascade Mountains from British Columbia to California.  Along the coast of California, it is common to the redwoods but sporadic further south.

Habitat: It is very common in second growth forests, especially along edges and openings. 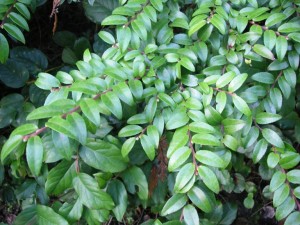 Diagnostic Characters: Its oval to lance-shaped foliage is evergreen, leathery and irregularly toothed (1-2 inches or 2-5cm long); often with a pinkish-brown or purplish tinge.  The flowers are pinkish-white bells, typical of many of our ericads.  The fruits are usually small purplish-black berries.  Sometimes you may find plants with berries that are larger and bluer with a waxy bloom resembling blueberries. 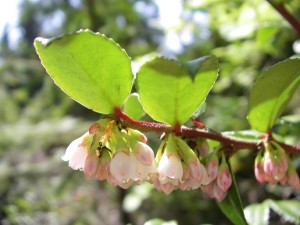 Pinkish-white bell-shaped flowers are attractive to many different pollinaters, including hummingbirds! 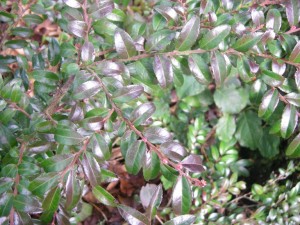 Foliage is sometimes purplish or bronzy, especially in winter.

In the Landscape: Evergreen Huckleberry is very versatile in the landscape and should be included in almost any natural revegetation project.  It will form an attractive hedge given time. 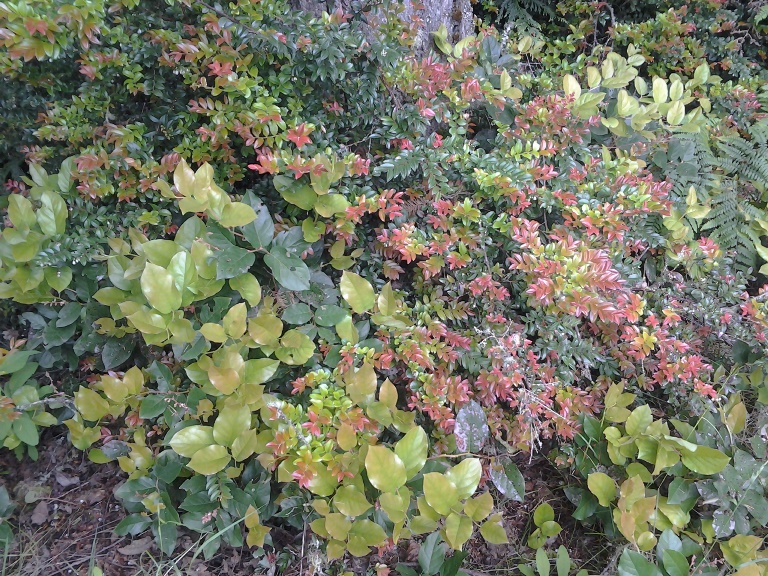 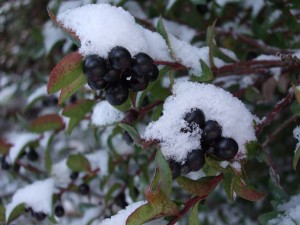 Huckleberries taste sweeter after a frost! 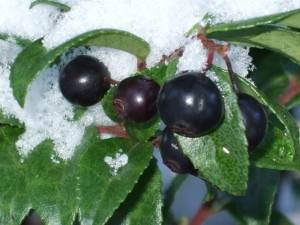 Propagation: Seeds are slow to germinate, but have no special requirements. However, stored seed may benefit from a stratification period.  Seedlings grow slowly and require 2-3 years to produce a saleable plant.  Even so, it is better to plant container-grown nursery stock with intact root systems. Wild-dug Evergreen Huckleberry does not transplant well.  Hardwood cuttings are someitmes successful.

Use by People:  Natives ate the berries fresh or dried them into cakes.  Today, common lore asserts that they are sweeter after the first frost.  The berries are a bit tedious to pick and separate from the foliage, but are delicious baked into muffins.  As for Salal, “Brush-pickers” collect Evergreen Huckleberry foliage for the florist trade. 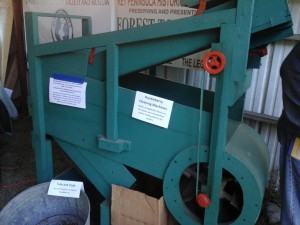 Huckleberry Cleaning Machine on display by the Key Peninsula Historical Society at the 2015 KP Farm tour. The machine separated leaves and other debris from the berries. 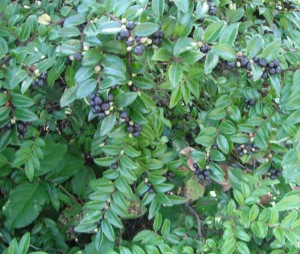 Use by Wildlife: Many songbirds and mammals eat the berries, including black bears, chipmunks, and mice. Deer, elk, rabbits, and grouse browse the foliage. Flowers attract hummingbirds, butterflies and other pollinators.