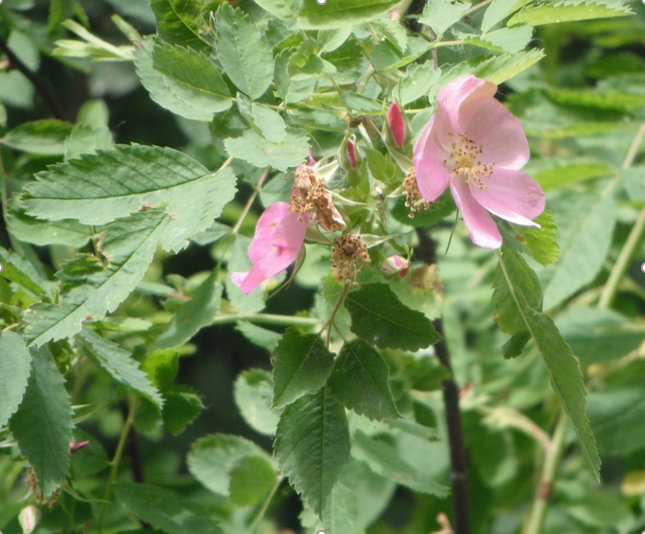 Relationships: There are over 100 species of rose native to Eurasia, North America, and Northwest Africa. Long prized for their beauty and fragrance, more than 14,000 cultivated varieties of roses have been developed. There are about 22 species native to the United States. We have 3 common species on the west side of the Cascades in our region: Rosa gymnocarpa, R. nutkana, & R. pisocarpa. R. woodsii is common on the east side of the Cascades.

Distribution: This species is native from southern British Columbia to northern California, mostly on the west side of the Cascades in B.C. and Washington; more widespread in Oregon.  It has been found in one county in northern Idaho.

Diagnostic Characters: It is difficult to distinguish from Nootka Rose, except that its pink flowers are smaller and usually in clusters of 2-10.  The stems are variously prickly; it also has paired prickles that arise at the base of each leaf, but they are usually smaller (or missing) than Nootka Rose’s.  Leaves have 5-9 finely toothed leaflets that are not glandular.  The fruit are small, pea-sized, round to pear-shaped, purplish-red hips borne in clusters.

Habitat: Wetland designation: FAC, It is equally likely to occur in wetlands or non-wetlands.

In the landscape: Clustered Wild Rose can be used the same as Nootka Rose. It is great as a barrier plant, growing into an impenetrable thicket.  Its fragrance fills the air in a seaside habitat.  It is valuable for stabilizing banks, especially along streams. 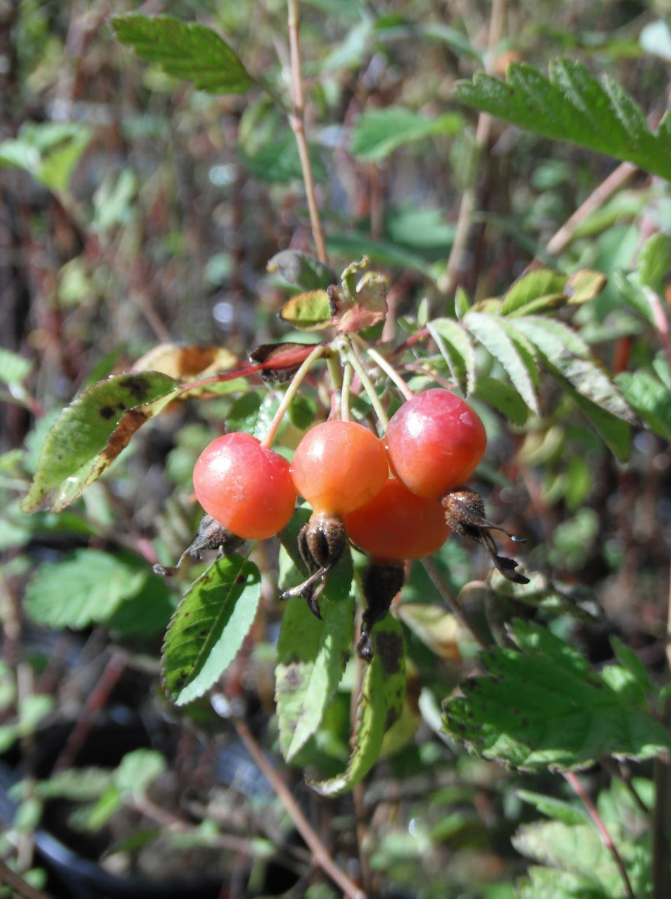 “Pea-fruit Rose” The hips are often about the size and shape of peas.

Use by People:  The fruit is much smaller than those of Nootka Rose and there is only a thin layer of flesh surrounding the hairy achenes that contain the seeds. Some natives ate the hips, raw or dried, or they boiled them to make a tea.  A decoction of the roots was used to treat sore throats or as an eyewash.  The bark was used to make a tea to ease labor pains.  Rose hips are sometimes used to make jams or jellies; they are rich in vitamins, such as A, C, & E.