Names: The genus has been alternatively spelled Pachistima or Pachystima; it means thick stigma.  The species has also been known as Paxistima myrtifolia.  Myrsinites means like myrsine, or myrtle, referring to its boxwood-like appearance.  Other common names include Falsebox, Boxleaf Myrtle, Mountain Lover or the mnemonic, “pa-kissed-ma.”

Relationships: There are only 2 recognized species of Paxistima, Cliff Green, P. canbyi occurs in the eastern United States. 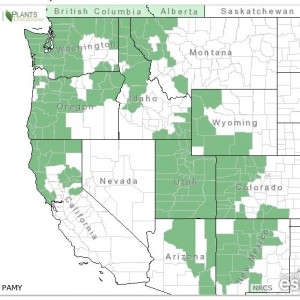 Distribution:  Oregon Boxwood is found from British Columbia to Marin County, California and in the Rockies from Alberta to New Mexico.

Habitat: Oregon Boxwood is most often found in the mountains in relatively dry, open, sunny sites or open forests.

Distinguishing Characters: Oregon Boxwood is easily distinguished from other native evergreens by its opposite leaves with toothed margins.  Its flowers are maroon or mahogany, very small but fragrant.  Small, oval capsules contain only one or two seeds.  Each seed is mostly surrounded by a white fleshy aril. 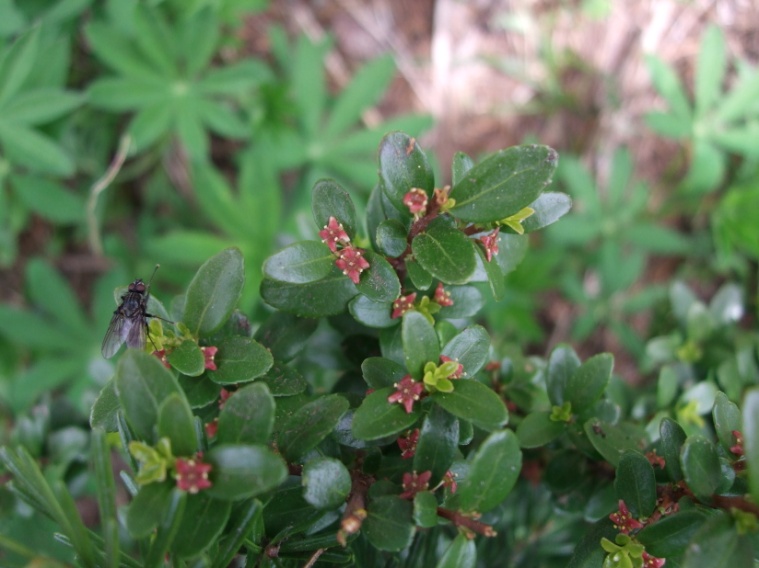 In the Landscape: Oregon Boxwood can be used similarly as are the cultivated shrubs it resembles, Boxwood, Buxus sempervirens, or Japanese Holly, Ilex crenata.  It can be used as a border or a low-growing hedge, or in a woodland garden or rock garden.  It needs a well-drained soil; it will not perform well with too much water.

Propagation: Oregon Boxwood is easily propagated by softwood cuttings or by layering.  Seed propagation is difficult but success may be achieved with a cool stratification period for several months.

Use by people: Oregon Boxwood is sometimes used as greenery in floral arrangements, but care should be taken not to decimate native populations when collecting.

Use by Wildlife: It is considered an important forage food for deer, elk and moose.  Mountain Sheep and grouse also eat it.  Although there is no evidence that seeds are disseminated by anything but gravity, the white, fleshy arils may entice ants to distribute the seeds.