Names:   Contorta means twisted, referring to the young shoots. It is called Shore Pine or Beach Pine because it is often found along the Northwest coast. The Lodgepole pine, Pinus contorta var. latifolia (latifolia=broad-leaved) is a variety known for its tall, straight trunks, common in the Rocky Mountains. 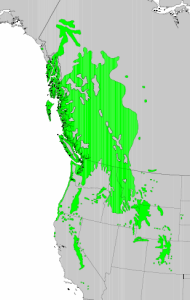 Distribution: The Shore Pine or Beach Pine is found along the coast from southern Alaska to Northern California. Lodgepole Pine is found throughout the Rocky Mountains and other western mountain ranges. 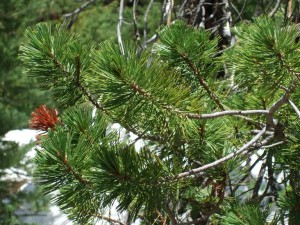 Habitat: It is highly adaptable and can grow from dunes and bogs to rocky hilltops and is tolerant of low nutrient conditions and salt-spray. 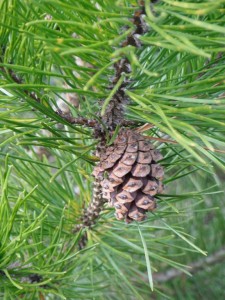 Woody cones often hang on to the tree for a long time.

Diagnostic Characters: The 1-2 inch (2.5-5cm) long, paired needles are stiff and often twisted.  The cones are small and hard (about 1-2 inches or2.5-5cm long) with a sharp prickle at the tip of each scale. They are twisted at the base so that the cones end up pointing toward the trunk. Like many pines, the cones are sometimes serotinous, which means they are sealed shut by resin, usually requiring a fire to release the seeds (although very old ones will eventually open on their own). 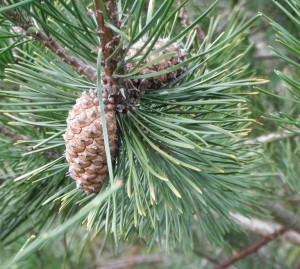 In the Landscape: Shore Pine has an open form with interesting branching patterns, and is best planted in drifts.   In seaside plantings, Shore Pines are often sculpted by the wind making them quite picturesque.   Pines produce new shoots in the spring, called “candles.”  If it is desired to control the growth of pines, it is better to pinch back the elongating candles in the spring rather than shearing or pruning.  In fast growing species, controlling growth may be an effort in futility. 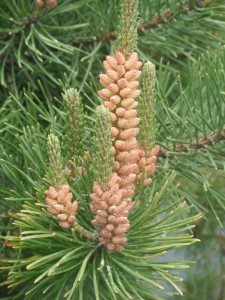 Propagation is easiest by seed; old cones need to be stored in a dry place to encourage them to release their seeds.  Stratify seeds at 40º F (4ºC) for 30 days. Seeds may remain viable up to 17 years in cold storage. Cuttings are difficult but are possible using single leaf fascicles with the base of a short shoot taken from very young trees.  Pinus contorta has also been propagated using micropropagation techniques.

Use by People:  Natives used the pitch medicinally and put it on open sores.  Today, the lumber is sometimes used for cabinets, knotty pine paneling and other finish work.  Its sibling, the Lodgepole Pine, was used by natives, as the name suggests, for the central pole in tepees.  The straight trunk of the Lodgepole Pine is also used for fenceposts, poles and utility poles.

Use by Wildlife: Nationwide, pines are second only to oaks in their food value to wildlife.  In the Pacific region, pines are the most valuable.  They have nutritious, oily seeds that are favored by many birds, especially Clark Nutcracker, crossbills, grosbeaks, jays, nuthatches, chickadees, and woodpeckers.  Many small mammals, such as chipmunks and squirrels also eat the seeds.  Foliage is eaten by grouse and deer.  Porcupines and small rodents eat the bark and wood.  Pine needles are a favorite material for making nests. Large pines provide excellent sites for roosting and nesting; small pines provide good cover for many animals. 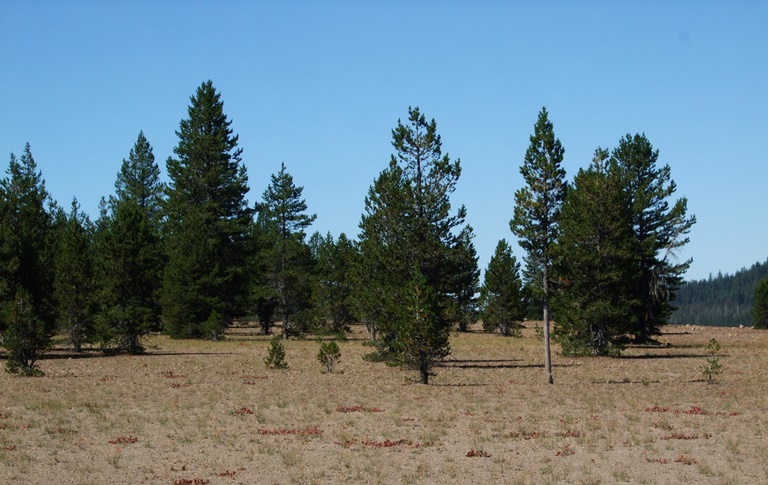