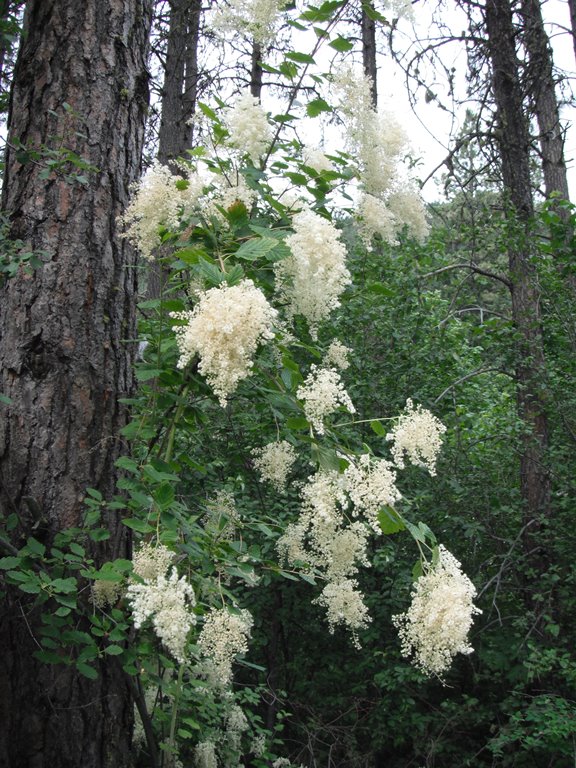 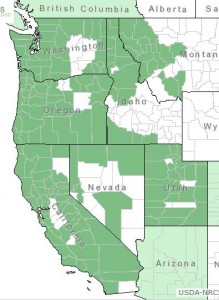 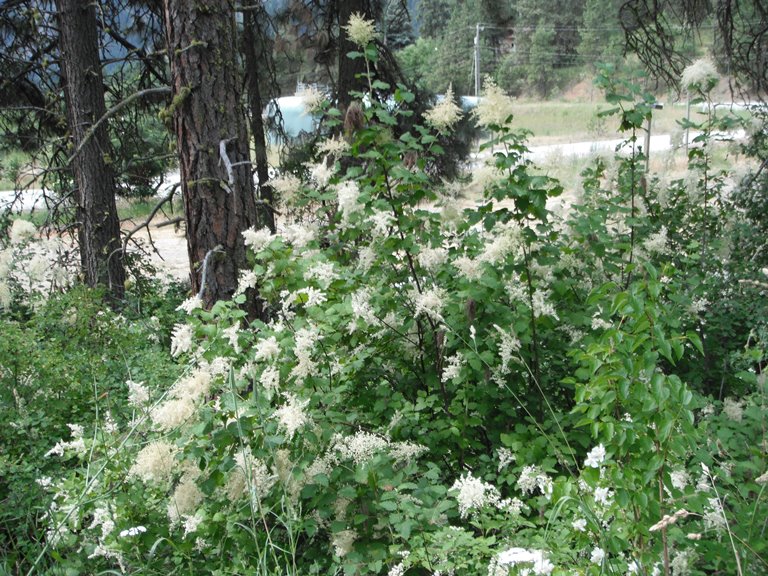 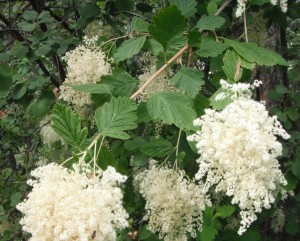 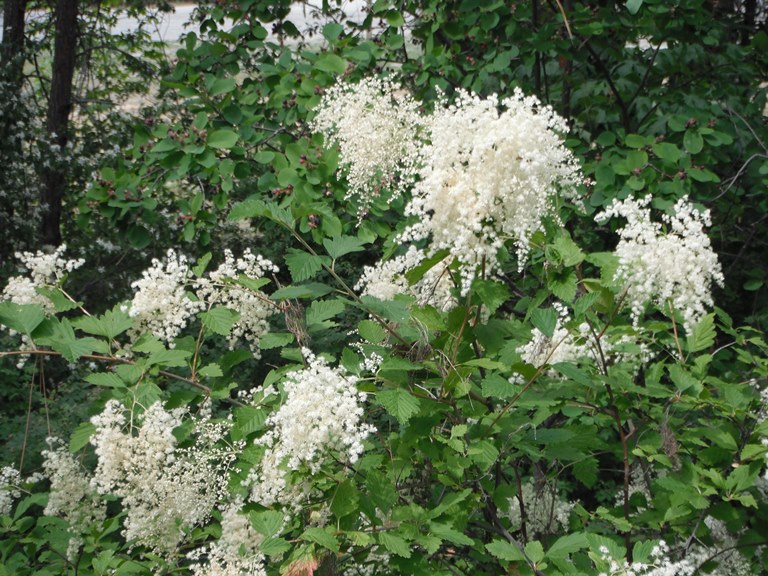 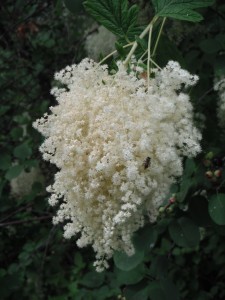 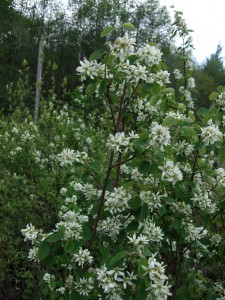 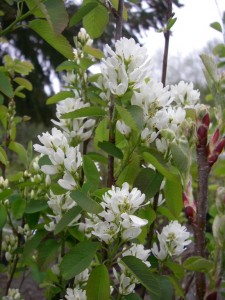 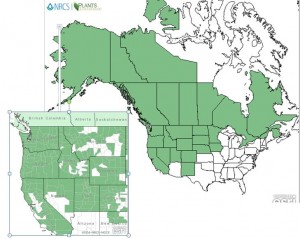 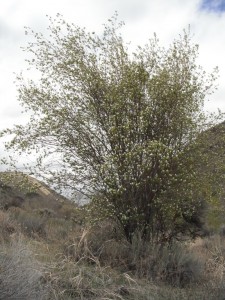 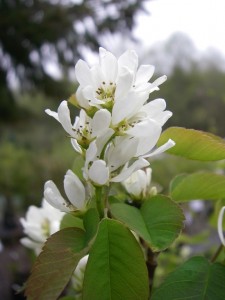 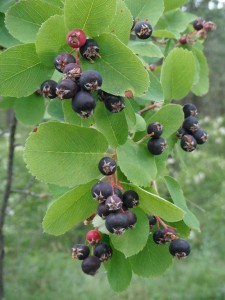 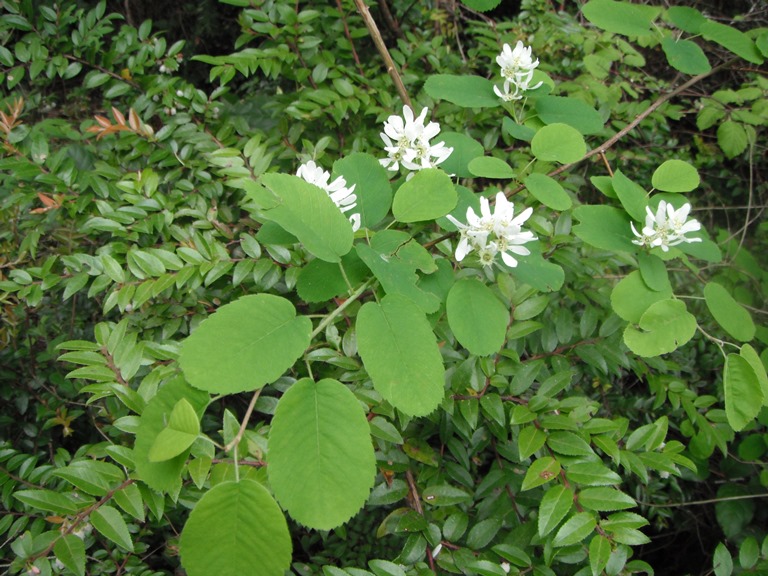 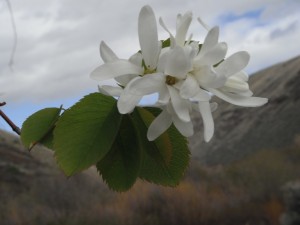 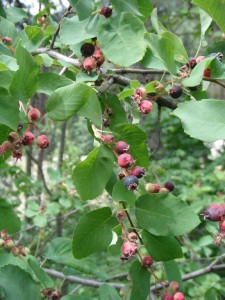 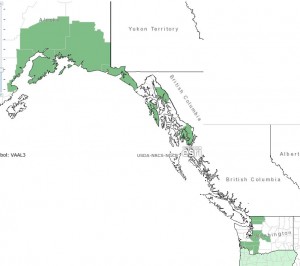 Alaskan Blueberry is one of the dominant shrubs in coastal forests of Alaska and B.C, growing to 6 ft (2m).  It is believed to be a polyploid hybrid derived from Oval-leaf Blueberry (V.ovalifolium) and Red Huckleberry (V. parvifolium).  It often grows together with Oval-leaved Blueberry. The two are difficult to tell apart.  Alaskan Blueberries are bluish to purplish black without bloom.  They are usually darker than and not as sweet as Oval-leaved Blueberries.  The twigs are strongly angled and yellowish-green.  The bronze to pinkish green flowers appear with or after the leaves.  On Alaska Blueberry, if you look closely, there are widely spaced hairs along the midvein on the underside of the leaves. Many sources lump it with Vaccinium ovalifolium. 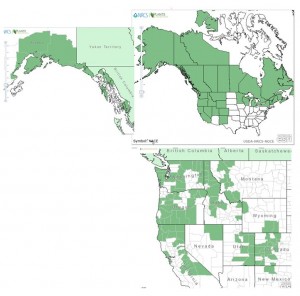 Dwarf Bilberry, also known in various combinations of Dwarf, Swamp or Sierra with Blueberry, Bilberry, Huckleberry, Whortleberry, Grouseberry, is a low spreading, mat-forming shrub, growing to 12 in. (30 cm) tall.  It grows in bogs, and subalpine wet meadows.  Its urn-shaped flowers are white to pink and narrow with 5 lobes.  Its leaves are distinctly toothed, bright green on both sides, with a pronounced network of veins on the underside.  Its sweet, blue berries have a pale gray bloom and are preferred over many other blueberries. It is an extremely important food for Grizzly and Black Bears. 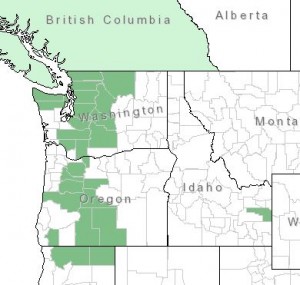 Cascade Huckleberry is a low, mat-forming shrub, growing to 6-12 in. (15-30 cm) tall.   It grows in subalpine and alpine meadows of the Cascades and the Olympics.  It is similar to Dwarf Bilberry but its leaves have a whitish bloom on their undersides and its pink flowers are nearly round.  Its blue berries are delicious as its name suggests. 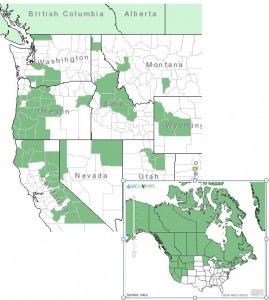 Bog Blueberry is a small, mat-forming shrub, growing 4 to 12 in. (10-30cm) tall.  It may also be known in various combinations of Bog, Alpine or Northern with Bilberry, Whortleberry, Huckleberry or Blueberry. It is found in bogs and subalpine heath throughout the northern latitudes. The flowers and fruit resemble those of commercial blueberries.  Its pink flowers usually have 4 lobes.  Its oval leaves are broadest above the middle and are green above, pale below with a strongly pronounced network of veins. The sweet berries were an important food for natives, especially of Canada and Alaska.  It is one of the most important fruits for Black Bears in the interior of Alaska.