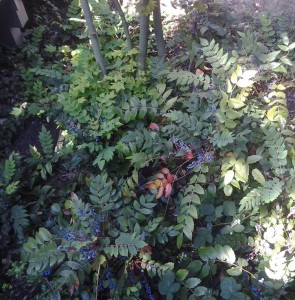 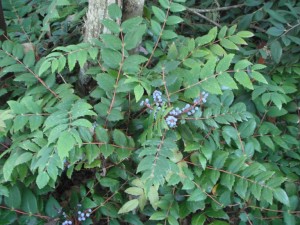 This shorter species is referred to as Low Oregon Grape to distinguish it from Tall Oregon Grape, Mahonia aquifolium.  It is also known as Berberis nervosa. Some botanists have argued that the genus Mahonia is not different enough from the genus Berberis to warrant its own genus. Mahonia is named after American Horticulturist, Bernard McMahon.  Horticulturists have consistently continued to use the genus Mahonia to refer to those species with compound leaves that give them a very different appearance from barberries. 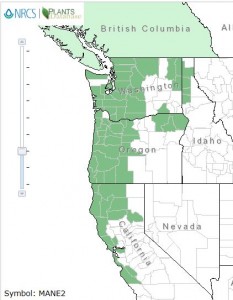 Relationships: There are about seventy species of Mahonia in Asia, and Central and North America, about 13 in North America.  Three are found in the Pacific Northwest. Some cultivated varieties have been developed.

Distribution: It is found from southern British Columbia to central California, mostly west of the Cascade and Sierra Mountains; but it also occurs in northeastern Oregon and Washington and the Idaho panhandle.

Habitat: It grows in dry to fairly moist, open to dappled, shady woods. 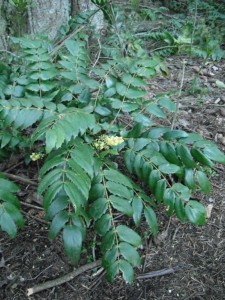 Diagnostic Characters: Mahonia nervosa is the easiest to distinguish from other native Mahonias; it has more leaflets, (9-19 per leaf) per ~12-inch (30cm) long leaf.  Leaves are clustered toward the tip of the stem in a terminal “rosette.”  Otherwise it is very similar to other Oregon Grapes with its spiny, leathery, often bronzy, compound leaves, bright yellow flowers and blue berries.

In the landscape, Low Oregon Grape is an excellent choice for dry shade.  With its leathery, fern-like, leaves, it is an attractive groundcover or border plant for a shady woodland garden. Its prickly leaves make it useful for a low barrier.  Sprays of golden-yellow flowers brighten gloomy, rainy spring days.  Flowers are followed by large clusters of blue berries with a waxy, whitish bloom. 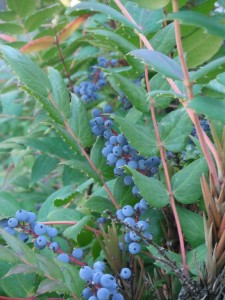 Propagation:  Seed is best sown as soon as it is ripe in a cold frame; seeds should not be allowed to dry out.  Stored seed requires a stratification period of at least 3 weeks.  Cuttings are best taken September-March, treated with hormone, and stuck in peat/perlite media; leaving only 1 or 2 leaflets and wounding the base of the cutting.  Applying bottom heat is also beneficial.  Layering and division are also possible. 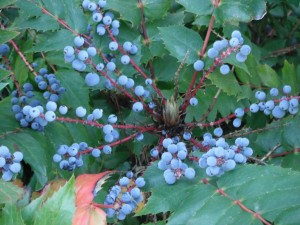 Use by people: The tart berries were eaten by natives, but not in quantity; they were more often mixed with sweeter berries such as salal.  Today they are more frequently used in jelly or wine.  The yellow roots were used for dying basket materials; especially Beargrass.  The roots were also boiled to make a medicinal tea.