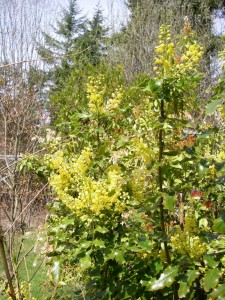 Names: Oregon Grapes have leaflets with sharp spines along their margin.  Because of this feature they are often confused with holly.  In fact, the species gets its name from the name for English Holly, Ilex aquifolium.  Aquifolium literally means leaves that have curved hooks like an eagle’s beak (aquiline is similarly derived).  Other common names include Oregon Grape-Holly, Holly-leaved Barberry, Holly-leaved Oregon Grape, Oregon Hollygrape and Mountain Grape.  It is the state flower of Oregon. 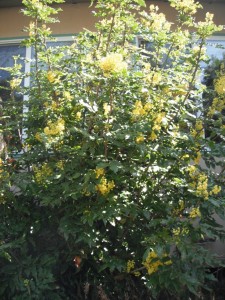 This species is referred to as Tall Oregon Grape only to distinguish it from Low Oregon Grape, Mahonia nervosa.  Mahonia aquifolium is also known as Berberis aquifolium.  Some botanists argue that the genus Mahonia is not different enough from the genus Berberis to warrant its own genus. Mahonia is named after American Horticulturist, Bernard McMahon.  Horticulturists have consistently continued to use the genus Mahonia to refer to those species with compound leaves that give them a very different appearance from barberries. 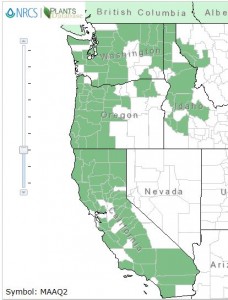 Distribution: Tall Oregon Grape is native along the Pacific Coast from southern British Columbia to Northern California.  Its range stretches across eastern Washington to the Idaho panhandle and Western Montana.  It also has been found growing in the Eastern United States, mostly in the Great Lakes Region.  Having long been valued as an ornamental shrub, it may have been introduced to some of those other areas.

Growth: Tall Oregon Grape grows to about 6-8 feet (2-2.5m) tall and spreads by underground stems to about 5 feet (1.5m) wide.  It may grow slowly at first as it becomes established, then will quickly grow to its mature size.

Habitat: Tall Oregon Grape is usually found on somewhat dry, rocky, open sites.  It is often found along roadsides; in fact it is a preferred native for new plantings along major highways. 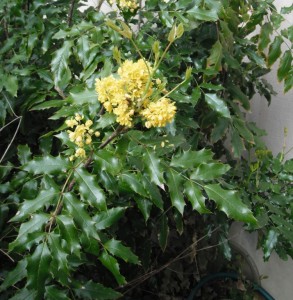 Diagnostic Characters: All Mahonias have compound leaves.  Tall Oregon Grape has 5-9 leaflets per leaf with one central vein per leaflet.  The leaves are generally shinier that those of Low or Creeping Oregon Grape. New growth in the spring is usually a bronzy red.  Cold weather in the winter often causes leaves to turn purplish or bronze.  Yellow flowers are borne in erect terminal clusters.  Dark blue, grape-like berries are about 1 cm across with a silvery bloom.

In the Landscape: Tall Oregon Grape has long been recognized as an outstanding landscaping choice.  It can be used as an accent plant or as a screen.  Its bronzy foliage, bright yellow, lightly scented flowers and bold texture can make an attractive addition to any landscape, but because of its prickly nature it should not be planted along walkways, where people may inadvertently brush up against it.  Old or disfigured stems can be pruned all the way to the ground. 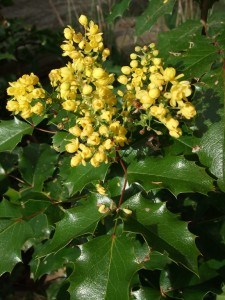 Propagation:  Seeds should be stratified for 90 days at 40º*F. (4ºC) or planted outside as soon as they are ripe– seeds should not be allowed to dry out. Cuttings should be taken in late fall and treated with hormone.  Suckers from large plants may also be replanted. 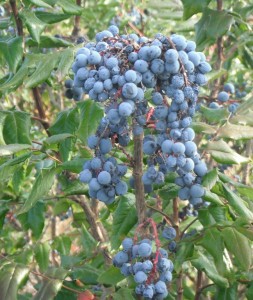 Use by people: Some natives ate the sour berries fresh.  The juice has a lot of natural pectin and is great made into jelly or wine, by itself or in combination with other berries such as Salal.  The roots of all Mahonias are bright yellow and were often used for making dye, especially for baskets.

Use by wildlife: Birds eat the berries of Oregon Grape.  The foliage provides cover for many species and browse for deer.  The flowers are very attractive to insect pollinators and hummingbirds. 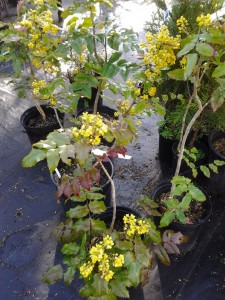 Creeping Oregon Grape or Creeping Mahonia is another valuable landscape shrub/groundcover.  Some consider it a variety of Tall Oregon Grape. It does hybridize easily and intermediate forms can be found. It is native to much of the western United States, but grows mostly east of the Cascades from Central BC southward, only reaching the coast in southern Oregon and northern California.  It is a good as a groundcover that grows only 1 to 2 ft. (30-60cm) tall, spreading by underground rhizomes; in full sun or partial shade. 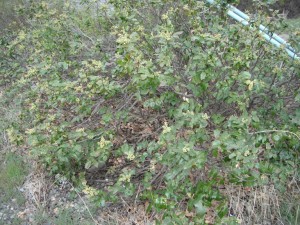