Names:  Gummy Gooseberry is also known as Fuchsia-Flowered Gooseberry, Lobb’s or Lobb Gooseberry, Gummy Currant, Pioneer Gooseberry, or Oregon Gooseberry.  It is named after William Lobb, an English plant collector.  It is called “Gummy” due to its hairy-sticky berries and sticky stems and leaves.

Relationships:  Currants and gooseberries belong to the genus Ribes (from the Arabic or Persian word ribas meaning acid-tasting). Some taxonomists separate gooseberries into the genus or subgenus, grossularia. In general, gooseberry plants have prickles; currants do not. Ribes is the only genus in grossulariaceae; which is closely allied with escalloniaceae, and iteaceae; all formerly included in saxifragaceae. There are about 150 species of Ribes in the temperate regions of the northern hemisphere, northwest Africa, Central America and in the Andes of South America; with about 50 native to North America. 30 are listed in the Vascular Plants of the Pacific Northwest. About 7-8 are native to the west side of the Cascades with about a dozen more found chiefly on the east side of the Cascades and ~17 limited to California or Oregon. 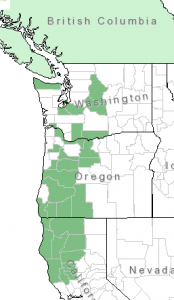 Distribution: Gummy Gooseberry is found from Vancouver Island in British Columbia to northern California, mostly on the west side of the Cascade Mountains.

Habitat:  It is found in moist to dry sites along streambanks, in open woodlands, lowland valleys, and mountain slopes.  It is more frequent in drier areas; decreasing in frequency with increasing elevation, precipitation, and continentality.

Diagnostic Characters:   Stems are spreading, finely hairy, usually with 3 nodal spines; bark brownish at first, turning deep grayish-red.  Small leaves are 3-5 lobed, deeply toothed, sparsely hairy or smooth on the upper surface, more or less hairy and glandular below.  Fuchsia-like flowers (borne singly or doubly) have white or pinkish petals and red calyces; stamens have white to pink filaments and purple or reddish anthers.  Berries are round to elliptic, reddish-brown, and coarsely bristly-glandular.

In the Landscape: With its attractive fuchsia-like flowers, Gummy Gooseberry is well-worth growing in an ornamental landscape.  It needs to be in a drier, well drained site in the garden, and could be a charming addition to a rock garden or hillside.

Propagation:  Seed is best sown outside or in a cold frame in fall. Stored seed may be stratified at 35º F (2º C) for 120 days.  Hardwood cuttings may be taken in fall or semi-hardwood, earlier in summer.

Use by people: The berries were generally considered unpalatable but were eaten raw or cooked by a few native tribes.  One author writes, “…it was covered with hair so sticky that the berry would adhere to one’s fingers, and gave the fruit a bitter taste, although the pulp itself was agreeable.”  The roots were used in medicinal preparations or boiled with cedar and wild rose roots, pounded and woven into rope or reef nets.  Thorns were used as probes for boils, for removing splinters and for tattooing.

Use by wildlife: Gummy Gooseberry, with its fuchsia-like flowers is attractive to hummingbirds.