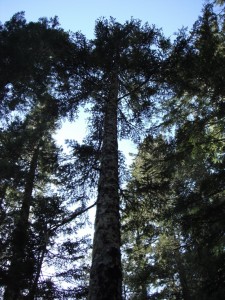 A mature Pacific Silver Fir in the Olympic National Forest.

Relationships:  There are about 40 species of true firs in the world, 9 in North America.  We have 4 in our region but only the Grand Fir, Abies grandis, is common in lower elevations.. 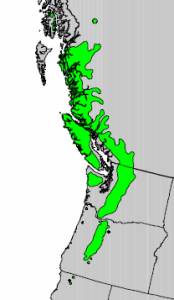 Distribution: Pacific Silver Fir is found from the coast of British Columbia and in the mountains of Washington and Oregon.

Growth: The tallest are just over 200 feet (60m), but most only grow to about 150’ (45m). The largest are mostly found in Olympic National Park and Vancouver Island. Pacific Silver Fir lives about 400 years.

A young sapling and the mottled bark of an older tree. 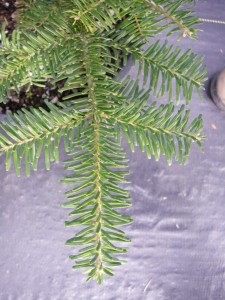 The needle arrangement is similar to the fur on a dog’s tail.

Diagnostic Characters: Like Grand Fir, Pacific Silver Fir has needles that spread horizontally from the sides, but they have shorter needles on the top that point forward and lie flat against the twig. This gives each twig an appearance similar to hairs growing on a dog’s tail. (It can only be “petted” one way!”

In the Landscape: Lovely Fir is not as easy to grow in cultivation, but is worth a try in a suitable habitat!

Propagation: Seeds should be placed in cold moist stratification for 28 days. Germination occurs best at 30°C Day/20°C Night, alternating temperature cycle. Germination is greater in dark than in light. 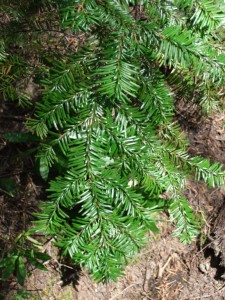 Use by People: These trees are not highly valued for lumber, perhaps because the wood is not as resistant to decay and the tree’s relative inaccessibility at higher elevations.

Use by Wildlife: Firs are useful to many animals for cover and nesting sites.  Grouse eat the needles.  Deer and elk eat the foliage and twigs in the winter.  Birds, chipmunks and squirrels eat the seeds.