Names:  Sitka Mountain Ash is sometimes called Pacific or Western Mountain Ash.  Sitka is the name of a Tlingit tribe, and is also the name of a city in southeastern Alaska.  The species name sitchensis is derived from Sitka.

Relationships: There are about 100-200 species of Sorbus in the Northern Hemisphere.  The genus Sorbus includes, Mountain Ashes (also known as Rowans), Whitebeams, and Service Trees.  True Ashes belong to the unrelated genus, Fraxinus.  The word Rowan is thought to be from a Norse word for tree, or a Germanic word meaning “getting red,” referring to its fall foliage color and berries.  Rowans were important trees in celtic mythology; the wood was used for Druid’s staffs, magic wands and dowsing rods.   Variety grayi differs from the species by having fewer serrations on the leaflets; it is toothed only above midlength, sometimes nearly entire.  It is found only in the Pacific states from southern British Columbia to the Siskiyous in Northern California. 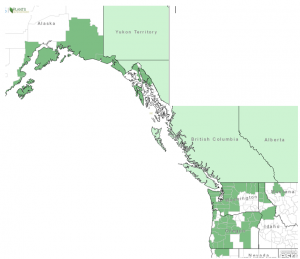 Distribution: The species range extends further north and east from southeast Alaska to the Yukon Territory, Alberta, northern Idaho and Montana.  There are intermediate forms where ranges overlap.

Growth: Sitka Mountain Ash grows 3-12 feet (1-4m) in open forests, clearings, streambanks, and avalanche slopes; often on drier, nitrogen-poor soils.  In B.C., it is found from the sea coast to subalpine parklands; its occurrence increasing with increasing precipitation and elevation.

Diagnostic Characters:  Winter buds and young growth are covered with rusty-red hairs and are not sticky.  Pinnately compound leaves have 7-11 bluish-green leaflets.  Leaflets are rounded at the tip and coarsely toothed from ¾ of the margin to the tip – to nearly entire.  White flowers are borne in round-topped clusters.  Fruit are berry-like pomes, pinkish to orange-red, with a bluish or whitish bloom.

In the landscape: It is best used on hillsides; fall is its best season with its yellow, orange or red foliage and showy fruit.  It is useful for streambank revegetation projects. 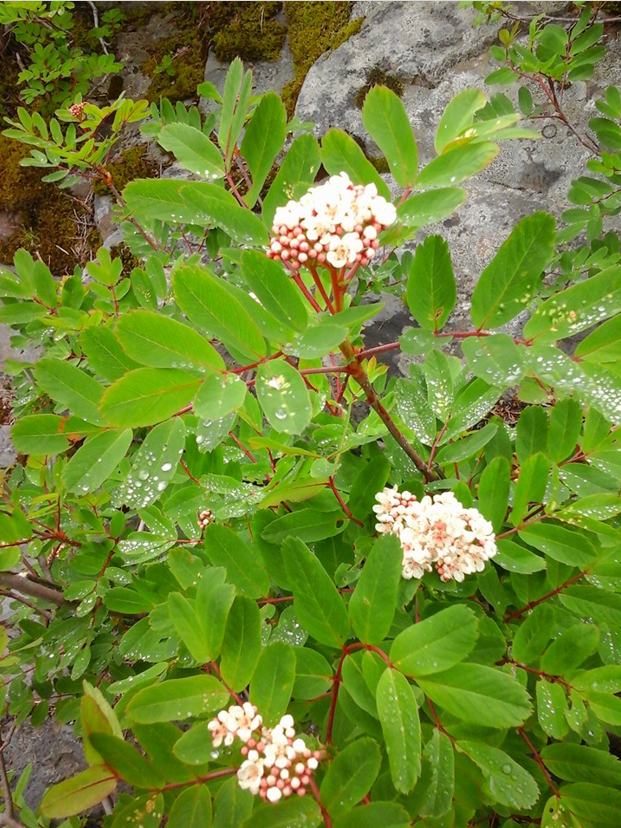 Use by people: The fruit is considered of poor quality for human consumption.   It turns sweeter after a frost and has been used raw, in preserves or cooked in pies.

Use by Wildlife: Sitka Mountain Ash fruit remains on the plant until late winter, making it valuable as winter forage.  It is important in the diet of many upland gamebirds, songbirds, and small mammals.  The foliage and twigs are browsed by deer, elk, and moose.  Black bear and grizzly bear also eat the berries, leaves, and stems.  Flowers are pollinated by insects.